In the first part of our tutorial, we discussed the data model we’ll use to power a multi-device TicTacToe game.

We also learned how to integrate Simperium into an iOS app, and how to authenticate our clients by means of a pre-generated token.

One of the biggest technical challenges of this app is: suppose our users have a Match initiated between two players. In our current data model, this is directly translated into: the two clients each have a Player object in the Player bucket, and there is also a Match object linking both players.

Due to the nature of mobile devices, any of the clients can suffer a network disruption at any-time (the device itself might even shutdown due to low battery!)

So… how do we notify our users that their opponents went offline?

Presence is one of the coolest features offered by Simperium. What does it do, exactly?

The presence feature turns a bucket into an ephemeral store. There are two options:

In our particular scenario, due to our decision to automatically authenticate every device with the same pre-generated auth-token, we’ll need to enable Client Presence in both the Match and Player buckets.

By toggling client presence on, whenever a device running our game goes offline, Simperium will automatically remove all of the Player and Match entities that were created by that device.

In order to toggle presence for a given bucket, we’ll need to run a simple curl request:

The APP_ID and APP_ADMIN_TOKEN are both available in your Simperium application’s dashboard, as seen here: 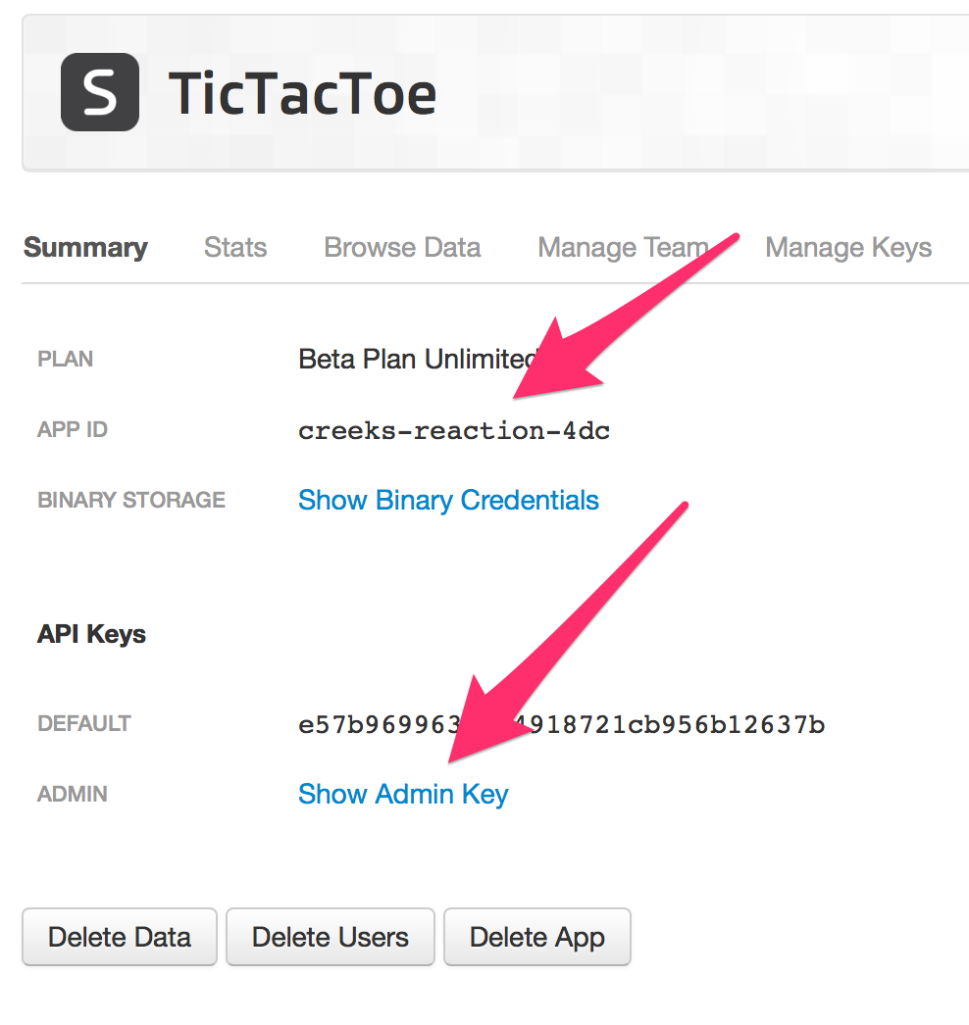 Since we require client presence to be enabled in both, Player and Match buckets, we’ll need to run two curl requests.

Once that’s ready, Simperium’s backend will make sure that whenever a client goes offline, all of the objects that were inserted by that client are removed.

In order to signal a Player’s presence, let’s insert a new Player entity into CoreData, whenever the app becomes active:

We’ve already written the code that will disconnect the WebSocket when the app becomes inactive. When that happens, we can expect the Player entity to be deleted (due to our presence settings): all we need to do is to clear the reference to the player instance!

We’ve discussed before that a match entity will be a simple object that carries the playerID of the involved parties, plus an object representing the TicTacToe board itself. It’s time for us to discuss some application logic…

A match should be initiated when:

An opponent is eligible if:

All of these conditions can be easily checked, locally, by means of a couple CoreData queries. You don’t need to perform a single backend request: Simperium informs you of any changes to the data.

Code for the entire startMatch method implementation is available here.

Our application logic is based on two simple data structures. In order to react accordingly to the game state as new changes come in, we’ll need to setup our two Simperium Bucket’s delegates (Player and Match) as follows:

You can take a look at the entire delegate implementation here. The different events that are being handled are:

The TicTacToe board itself is represented by a NSArray instance with 9 NSNumber’s in it.  We’ve defined a handy NS_ENUM to specify the allowed matrix values: empty, circle, and cross.

We’ll rely on our Match entity just as a Transport Object: whenever there is a change that requires the UI to be refreshed, we’ll feed our TTGameBoard instance with the updated match.matrix property, and simply request our TTBoardView object to get refreshed.

You can check out the code for refreshing the user interface here.

You’re welcome to take a look at the final project. Note that you should open TicTacToe-Final.xcodeproj to get the final version of the project.

Got any questions? we’d love to help! Please leave a comment, ask a question, or post an issue, and we’ll get back to you shortly.

Simperium is a cross platform framework that allows you to seamlessly sync data through multiple devices.

Tic Tac Toe is one of the simplest games you can possibly think of: two players take turns to place a piece (either a cross or a circle) on a 3×3 matrix. The first player that succeeds in placing three marks in either a horizontal, vertical, diagonal or antidiagonal wins the game.

We have built a single-device Tic Tac Toe game for iOS: source code available here. In this tutorial we’ll be learning how to integrate the Simperium framework, and how to enable multi-device data synchronization without writing a single line of backend code.

Our approach to implement the data model will be straight forward. We will maintain two collections:

Each player will have a unique ID, and will make sure that as long as the app is active, its uniqueID will be present in the Players collection. We will rely on this mechanism to initiate a match between two players.

The match object itself will have three attributes: the ID of both players, an array representing the status of the gameboard, and an extra flag we’ll use to indicate which player should perform the next move.

Let’s dive into the details!

First of all, we’ll need to add drag the Simperium.xcproj file to our TicTacToe project, as seen below: 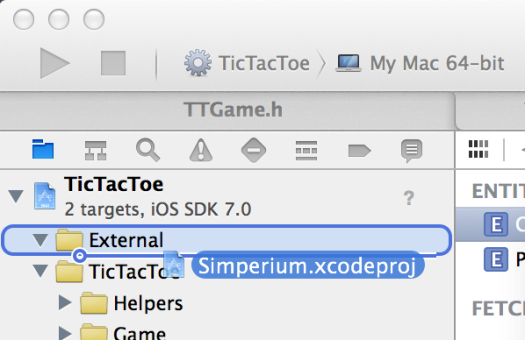 Once ready, let’s make sure we’re linking the required frameworks:

Since Simperium is an Objective C framework, we will need to instruct Xcode’s linker to work with Objective C libraries as well. In order to do so, let’s add the ‘-ObjC‘ string in the Other Linker Flags, under the project’s Build Settings, as seen here:

At last, we’ll need to add Simperium as a target dependency, in the Build Phases section of our project:

Simperium is designed to listen to your CoreData Context, and efficiently sync delta’s through the network.

As a requirement, the classes you want to sync must subclass SPManagedObject -instead of NSManagedObject-.

Let’s open our Data Model, and update both, Match and Player entities, accordingly:

We’ll need to signup for an account at Simperium’s website. Once there, let’s add a brand new app. We’ll need both, the AppId and AppKey, to initialize our instance of Simperium:

There are several ways in which you can implement user authentication: the framework itself already provides a customizable User Interface to perform Signup and Sign-In.

However, in this particular project, we want to offer a signup-free experience: we want our users to be able to begin playing Tic Tac Toe, as soon as the app finishes launching.

In order to do so, let’s pre-generate a user token: every instance of this game will share the same user. You can find the Generate Token button in the Browse Data section of your app:

One of the benefits of using Simperium’s library is that Core Data disk operations are performed in a background thread, automatically, by the library. As a requirement for this to work, the Main ManagedObjectContext must not have its persistentStoreCoordinator set.

In our TicTacToe game, we’ve wrapped up all the CoreData initialization code in a single class, called TTCoreDataManager (Header | Implementation). The only difference with a regular CoreData stack initialization can be seen below:

We’ll be initializing and authenticating our Simperium instance in the AppDelegate itself, as soon as the application:didFinishLaunchingWithOptions: method is executed:

After calling the two routines outlined above, we’ll have a Simperium instance initialized with manual authentication, and our CoreData stack will be ready to begin operating.

We’ll rely on the following lines of code to do so:

At this point we have a fully functioning TicTacToe game, we have successfully integrated the Simperium Framework, and we’re automatically authenticating the user when the app is brought to foreground (and logging off when the app is closed).

In the second part of this tutorial, we’ll learn how to signal our presence, initiate matches between two players, and how to sync our board… everything, just with Simperium Sync.
Stay tuned…!
Learn more about how to integrate Simperium into your iOS app.

@simperium is a service for developers to move data everywhere it's needed, instantly and automatically.